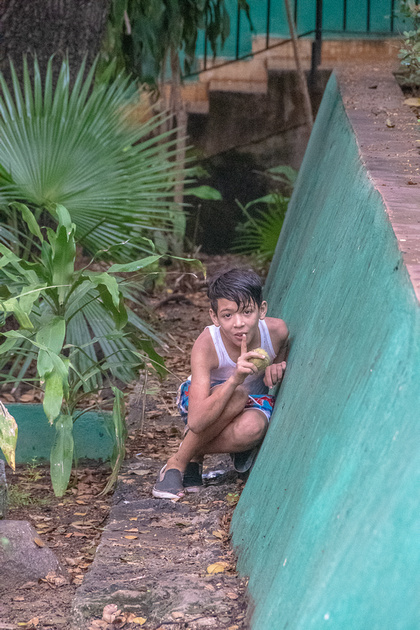 Without a doubt it is the unexpected surprise expressions or actions that help tell the story.

Another photo moment in Havana! This young man was engaged in a game of hide n seek and he had made the rounds of the park hiding where-ever he could find a spot.  He jumped down on the side of the wall, and was  crouched ready to take off when he spotted me.  He didn’t want his cover blown so with a finger to his lips he indicated we were to keep quiet.  The park wasn't that big so it was kind of amusing that his friends really didn't see him especially with me a few feet away with a camera pointed in his direction..  A split second later he was up and running to another spot and the game continued.

It is  tricky taking photos of minors, but who can resist the expressions and light heartedness of kids at play.  I guess there is an advantage of street photography in another country but still courtesy should always remain upfront. If we shoot a scene from a distance  the flow and interaction of people are not interrupted.   If our eyes meet,  I simply lift the camera a bit and if it's a real no go for them, they will indicate so.  In the States with kids involved I would definitely be looking for a nod of approval from a parent.

In this day and age of selfies, everyone is used to having their picture taken and kids learn early on to strike a pose when a camera faces them. My goal is to look for a natural reaction in a natural setting.

Let's turn the children's game around a bit.  Who is doing what?   In my mind, the photographer is the one really engaged in a game of hide and seek.

They are training themselves to be aware of  what's going on around them and look for the unusual keeping in mind that there is always a story lurking. One has to be ready and open for the possibilities.

Bottom line, I think you will agree that nothing beats capturing a spontaneous burst of energy and action like this young boy playing hide n seek!